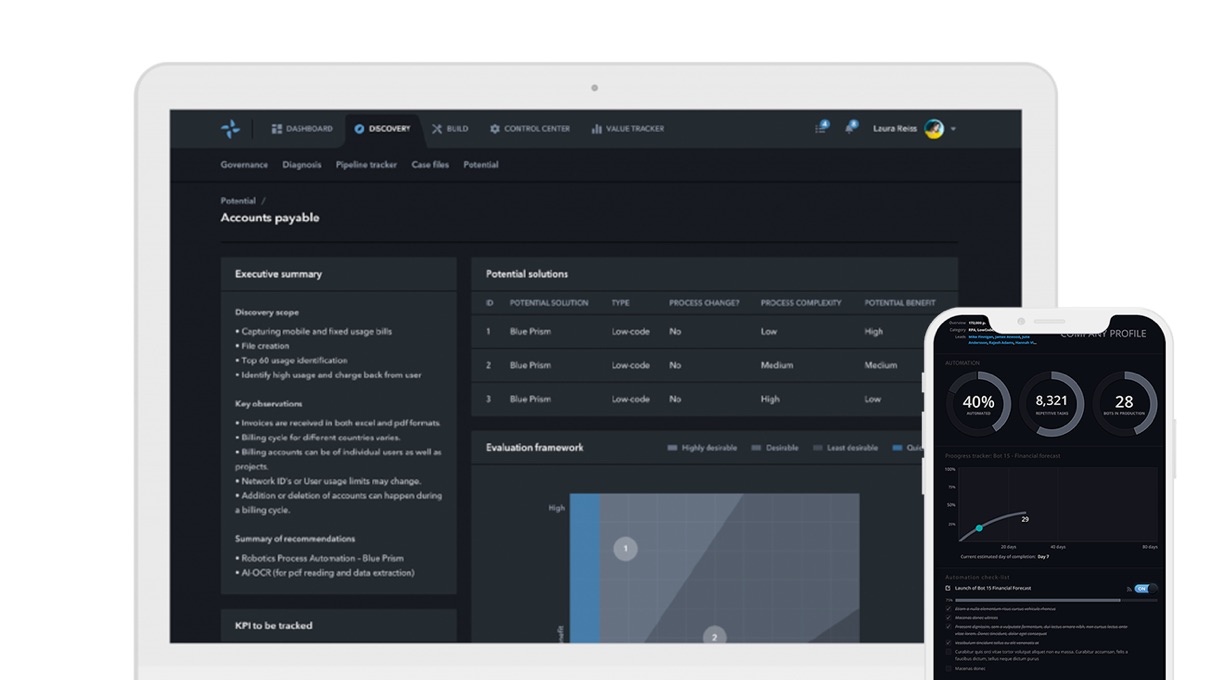 Imagine opening your laptop, typing — or, better yet, speaking — into your company’s operating system interface to monitor all the tasks performed by software robots (often referred to as RPA, short for Robotic Process Automation) and artificial intelligence (AI). In this vision your company is driving itself with the latest and greatest of technologies thru an Autonomous Enterprise System (AES), a new kind of super powerful enterprise platform.

As with the adoption of any new revolutionary technology (like AI and machine learning for instance), there will be problems for businesses that don’t adjust fast enough. Futurists estimate that hundreds of billions of dollars (if not trillions) will be saved shifting from a human to a digital workforce, not to mention the 24/7 operation of a company generating more growth and more revenues than ever before. With such a system in place, who needs to run a company in a very traditional way with traditional business processes?

The building blocks of Autonomous Enterprise are already here

The building blocks of an Autonomous Enterprise (AE) are to some extent already here. From Robotic Process Automation robots and AI (Artificial Intelligence) models that can predict cash flow, optimize inventory and prescriptive analytics to plan the future. OCR (Optical Character Recognition) technologies for computer vision and text analysis are digitalizing end-to-end contracts and NLP (Natural Language Processing), as well as Chatbots, are creating more autonomous call centers and customer support functions. However, to make the analogy with self-driving cars we have no operating system keeping it all together. We have the cameras, we have the sensors and connectivity, but we don´t have the system keeping it all together.

The analogy to autonomous vehicles

In the past five years, process automation and enterprise AI, has gone from “maybe possible” to “possible” and “commercially available.”, even though each autonomous enterprise technology are very fragmented and separated from each other. The lack of an operating system to keep it all together makes it difficult to implement such technologies to create the ultimate self-driving company. The idea of a self-driving company is still very much science fiction, and ludicrous to pretty much everybody, just like autonomous cars were a few years back.

When will the Autonomous Enterprise take over?

So, let´s start with the most burning question you want to ask: When will the Autonomous Enterprise (AE) take over? Answer: you´re going in the wrong direction. The autonomous enterprise is not a single system that someday will be ready to ship. It is a collection of systems, methodologies and technologies that will gradually turn a company into a self-driving entity, and it will be glued together with a new kind of operating system, and AES (Autonomous Enterprise Systems). The takeover will depend on technology but also maturity and insight to see the exponential potential in an autonomous enterprise. The maturity and insight part are what will create disruption. Companies that are too slow to act on these new technologies will see themselves behind competitors and new companies that utilize the autonomous enterprise technologies in full. This is also why you should ask yourself how much you should spend on more “traditional” digital transformation and current business processes. It may give you some tactical improvements, but it will not transform you in a way that will make you more competitive or prepare you for exponential growth.

The road to the Autonomous Enterprise

Teach software robots and AI models the rules of your company and set them loose to navigate towards the overall KPIs and mission. This simple description includes a whole lot of complexity. To run a company or organization with its many functions and goals is one of the more complicated activities one can do. Following a list of rules, policies or goals of the company isn’t enough to manage and operate as well as a human does. Even the simple parts of operating and managing your company — like expense reporting, forecasting, marketing and sales — are actually much trickier than they sound. And even if you manage to automate one process it is interconnected with another that is not. The company’s operating system will eventually combine all the technologies, measure performance and track value as well as make recommendation to take new paths. Lots of training data is needed and lots of processes needs to be engineered to support such AES.

Preparing for your Autonomous Enterprise

To prepare for your Autonomous Enterprise (AE) you need to look at current technology stack, source systems, APIs and data models thru a completely new lens. Monoliths need to be replaced with open and modular systems, and process needs to be re-engineered with a technology (not man) first approach. Whatever they say, automation and AI transformation is NOT about humans, it´s all about technology, and how that can fundamentally change your company. Your operating model is going to be a super computer fed with all the AE technologies that can learn from each other and who´s job is to endlessly improve the operation in sales, finance, fulfillment, marketing, HR, IT and all traditional functions that today is keeping the lights on. A system that can handle any situation in a millisecond and learn from it in real-time.

Imagining the future - and beyond...

It is hard to imagine what employees will do once everything is automated and self-operated but fact is that they will have more time to spend on growth and innovation than ever before and when the cost for operation is falling dramatically funds can be used to position your company and products.

One question remains open. If the AI is running your company, who is in charge? Let´s revisit this discussion later…

In the meantime, be sure to check out TurboticOS which is crucial for helping you plan, implement and measure all your Robotic Process Automation (RPA) and AI initiatives in one place.