From chaos to CAO:s – what Automation needs to do in order to move up from the “kids' table” 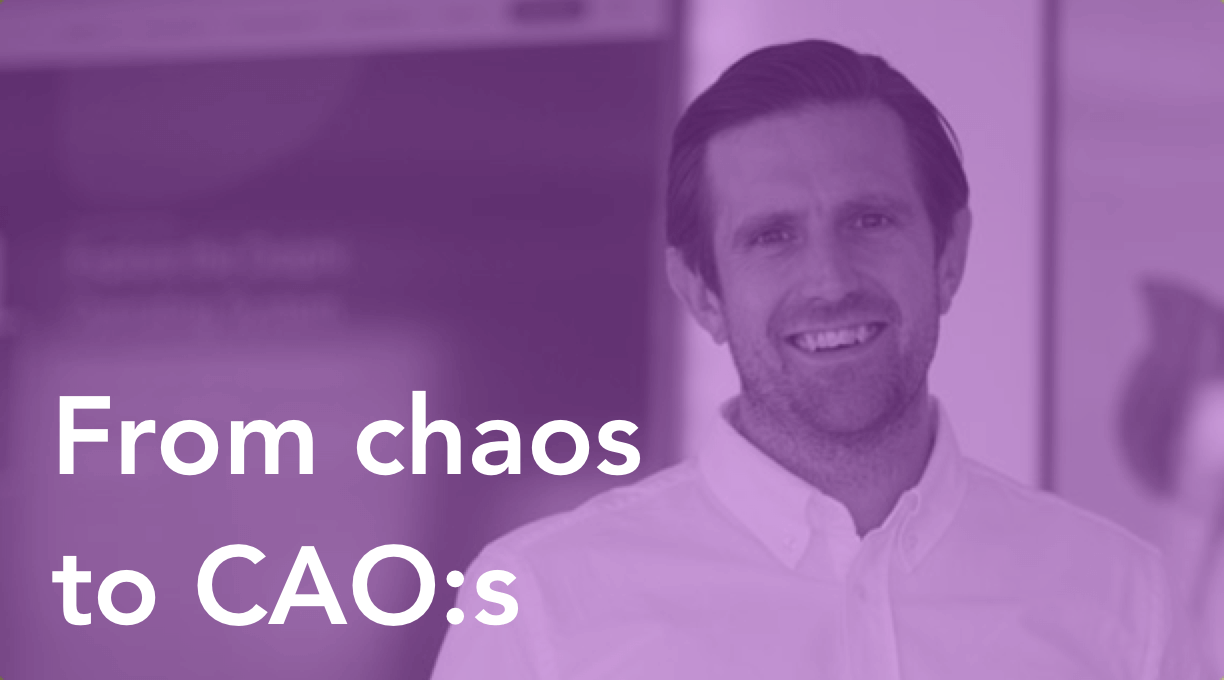 The benefits of automation have been well documented by all leading research firms and consultancies and there is talk about triple digit ROI numbers, $ Trillions saved, hundreds of people in Automation Centers of Excellence (COE) and a promise of ease-of-adoption from every tool vendor, yet there are no Chief Automation Officers (CAO) around, why is that?

If you  look beyond the marketing from Automation tool-vendors and service providers, there is a lot of organizational inertia, skeptical people, strategies and budgets that need to be navigated to scale automation from a few people tinkering with RPA to having automation as part of your organizational DNA.‍

Deloitte highlight that a roadmap and governance are key for scaling, industry experts highlight the need for goals and value tracking and Mckinsey make it even clearer by saying that among larger companies meeting their automation targets the distinguishing factors were about :

“making automation a strategic priority, focus on people as much as technology and develop an operating model that enables scaling”‍

There are millions of pages written about corporate strategy and how to align, solve problems, be lean, expand etc. And most of them have differing views on many things, but it seems to be generally accepted that once a function is part of the infamous C-suite it sends a signal that this is indeed “important” and central to the business. Now I will be the first to admit that Chief Automation Officers edges on C-Suite title inflation and such things are well described in this Wharton piece (probably ahead of its time, written in 2007) and this 2017 piece written within the recruitment space. ‍

But having said that, this CxO inflation does come from a good place and at the bottom is the idea to both recognize and send a public signal that certain functions are important within an organization and such signals should not be underestimated. Not only can it create a change in perception, but it may generate future revenue, profit and become a highly successful core-strategy. Many people (probably no one more than men in middle-management) scoffed when Google appointed Stacy Savides Sullivan their Chief Culture Officer in 2006 and they probably laughed out loud saying that the CCO is only about "buying bean-bags and allowing dogs at work". The same people are likely crying now (and have been for last decade) as Google, and similar firms, typically attract the best talent driving up salaries across the globe. But Google (Alphabet) has also had immense financial success, becoming the $1.9 Trillion Market cap behemoth they are today.

Culture is far from the only title, many C-suite titles that are unbelievable central today were discarded as management mumbo-jumbo as late as the early 2000s. Heck, even in 1990 only 50% of listed organizations even had a CFO, which was almost 30 years after the first one was appointed. With average tenure in the C-suite being 20+ years, this means that most organisations that were early with appointing CCO:s, CDO:s etc. are still only halfway through the tenure of their first appointment. And with a lag of maybe 10-20 years before a majority of large enterprises incorporate new titles there is a first mover advantage to be had. And perhaps the time has now also come to the field of automation to start appointing Chief Automation Officers (CAOs).

The struggles with scaling Automation

As articles from KPMG, McKinsey, Deloitte, EY, Bain and others have outlined long before us; scaling and managing automation is no easy feat. And those articles and thought leaders seem to all agree that scaling automation is not about more RPA bots, but it is really all about three main things:

And with the RPA and automation market seeing unprecedented growth in new tools, getting started with automation has never been easier (as I wrote about in this piece), however it seems that actually taking your automation to the next level perhaps has never been harder. And this McKinsey study tells us that approximately one third of automation projects fail in large organisations.

The promises are there with Automation growth numbers, Statista forecasting more than 10x growth in just the RPA market from 2020 to 2030 and reports everywhere marketing billions or even trillions in savings. Yet the shining lights of admired industry leaders are few and far between, and probably goes hand in hand with the lack of appointed CAOs.

In one way, this HBR paper perhaps hit the head on the nail when it comes to the challenges ahead for future CAOs.  As the Harvard people were researching the growing C-Suite they found:‍

“One strikingly consistent finding: Once people reach the C-suite, technical and functional expertise matters less than leadership skills and a strong grasp of business fundamentals.‍

Moving from the kids' table

In other words, in order to move from “head of RPA” to a Chief Automation Officer the key task is not to make the business more automation savvy, but rather the automation team more business savvy. And this is the very reason why Turbotic was originally conceived and what Turbotic OS is trying to address.

EY published an excellent piece of analysis in 2019 about the changing C-suite that may be a crystal ball for what’s ahead for automation. Not only have the vast a majority of organisations recently added to the C-suite, they are also actively looking to grow it. And looking at the top-3 list of C-suite titles they would want to see to ensure future growth it is very much aligned with appointment of CAOs, with digital transformation, innovation and AI being top of the list of CEOs, boards and investors.

Turbotic OS is built to get Automation COEs to move away from managing their lives in spreadsheets and shrugging their shoulders when asked about ROI. The move from “the kids' table” is a big one ahead for Automation teams, but it is so much more than being the best kid finishing all your food (i.e. doing more and more RPA) it’s about becoming an adult and be able to somewhat confidently discuss politics and pinot noir with the other adults (i.e. having a strategy, building business cases, generating reports and having data available at your fingertips).

So the question is, as digital transformation and AI is set to grow even more, will we see automation move from a small team with bit of a chaos to a proliferation of CAOs already within a few years?